While on a client site recently, I was asked to assist with some drawing changes.  I dutifully printed out the change request form, grabbed a pen out of the organizer on my desk, and began to populate the fields.  As soon as I had written the first few numbers, I could see a problem.  I studied the paper again, scrutinized the pen, and groaned.  Through the transparent barrel of the pen, I could see clear fluid sitting atop the pigment.  Rookie error… GEL PEN.  I threw the form in the shredder bin and silently gave thanks that it wasn’t “ORIGINAL DATA” that I had been documenting.  I studied my pen collection, and scribble tested all of them. Every. Single. One.  Those that didn’t appear to be the standard ball point ink went right into a separate cup, along with my pencils and highlighters.  In my mind, I called that cup “gel jail”.

That night, curiosity got the better of me, because although I knew that gel pens were “verboten”, I wasn’t positive as to why.  I’ve even had colleagues who triggered a deviation for using one. Every company that has a “Good Documentation Practices” SOP will instruct the reader to complete records in “indelible ink”.  Some will even go as far as saying “never use water-soluble ink.” And there was my answer, confirmed by Mr. Google.  Gel pen ink is water soluble.  And guess what substance is used in every facet of our industry, from media make-up to CIP?  You guessed it…water.

Time for some kitchen table science, inspired by an experiment in chromatography from my college chemistry class.

I grabbed all of the 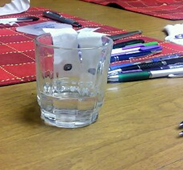 pens I could find in my bag.  Based on the logos, I know some of them were acquired from exhibitor tables at various industry events.   I fished a coffee filter out of the cabinet and cut it into strips.  I scribbled a heavy circle on one end of each strip, then placed the edges of the strips in a juice glass of water.  Then I waited.  Soon enough, capillary action took over and the water was drawn up the paper.  When it hit the ink spots…I understood.  Some of the spots bled like crazy, while others were unmoved.

In the spirit of thorough science, I spritzed alcohol based hand sanitizer (also acquired from an exhibitor) on the “indelible” ones and confirmed what everyone who has ever gotten ink on their shirt already knows…alcohol is a good ink solvent.

So as a friendly reminder: check your pens, your most critical tool, for suitability.